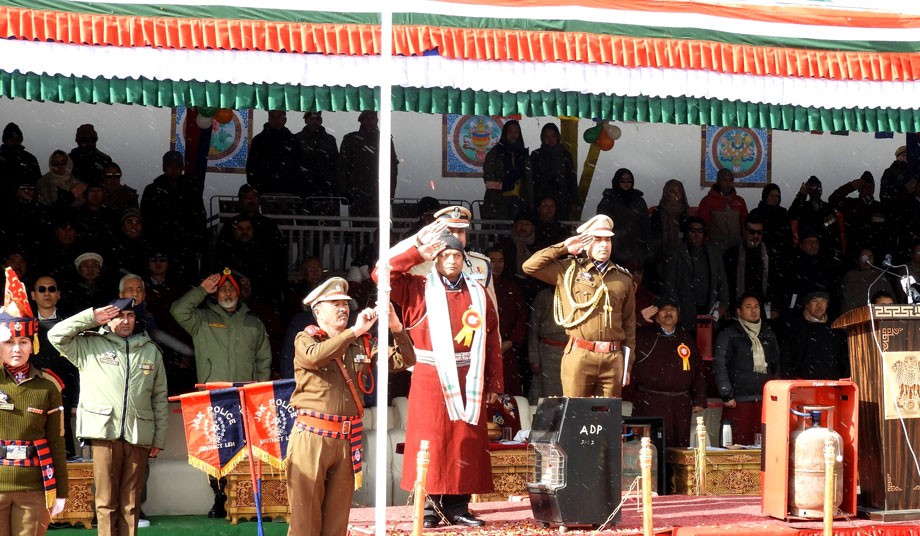 With the Union Territory status, Ladakh celebrated the national day in a very special and unique way as compared to the previous year. This year aerial salute by flying helicopter, artilleries, weapons and various other military equipment of Indian Army and Indo Tibetan Border Police were exhibited. Also, both the districts of the region, Leh and Kargil participated in cultural programme and parades.

Honouring the martyrs who sacrificed their lives in service of the nation, R K Mathur also laid a wreath at the Leh war Memorial, Hall of Fame.

RK Mathur said, “This year along with the celebration of 71st Republic day we will be celebrating a new Ladakh as a Union Territory.”

He expressed gratitude to Prime Minister Narendra Modi for fulfilling the long pending demand of the people of Ladakh and giving it a new identity.

He expressed gratitude for the valour of armed forces in securing the region and assisting local people in different ways including the rescuing of stranded trekkers of Chaddar trek, supply of essential commodities such as medicines and vegetables in the region during the peak winter season and many other activities. Also, he highlighted the developmental work carried out by the Hill Councils of both the districts.

RK Mathur congratulated the Padma awardees of 2020, Dr. Tsering Landol, Padma Bhushan in the field of medicine and Tsewang Motup for receiving Padmashree in the field of Trade and Industry.
Also, he mentioned various professionals of Ladakh excelling in different fields on various national and international forums be it scaling Mount Everest, sports, innovation and many more. He said that all these players who are excelling in different sports despite having limited infrastructure are an inspiration to many.

R K Mathur expressed the positivity in the development of health and education sectors in Ladakh with the sanctioned Medical College and National Institute of Sowa Rigpa. He said that Ladakh University is taking a new shape under the experienced leadership of C. Phuntsog, Vice-Chancellor. He stressed on the importance of preserving and promoting the rich cultural values and tradition along with all development and quality education.

Development of education, industries, food processing units, handicrafts and handloom, promotion of potential products such as Pashmina, aromatic and medicinal plants, communication accessibility in rural areas, exploration of new tourist destination, setting up of incubation centers and common facility centers in a decentralized manner to encourage self-employment and entrepreneurship, implementation of various government schemes and power development in the region were mentioned.

R K Mathur said, “The Central Government and the UT Administration are committed to meet the developmental aspirations of the people of Ladakh. The government is planning to sanction special packages for Ladakh. This is the time to plan and strategize development, and to absorb the boon of the status of Union Territory brings with it.”

Spectacular parade saluting the national flag by all the contingents and colourful cultural programme by the specially-abled people of PAGIR, artists and school students of Leh and Kargil was presented.