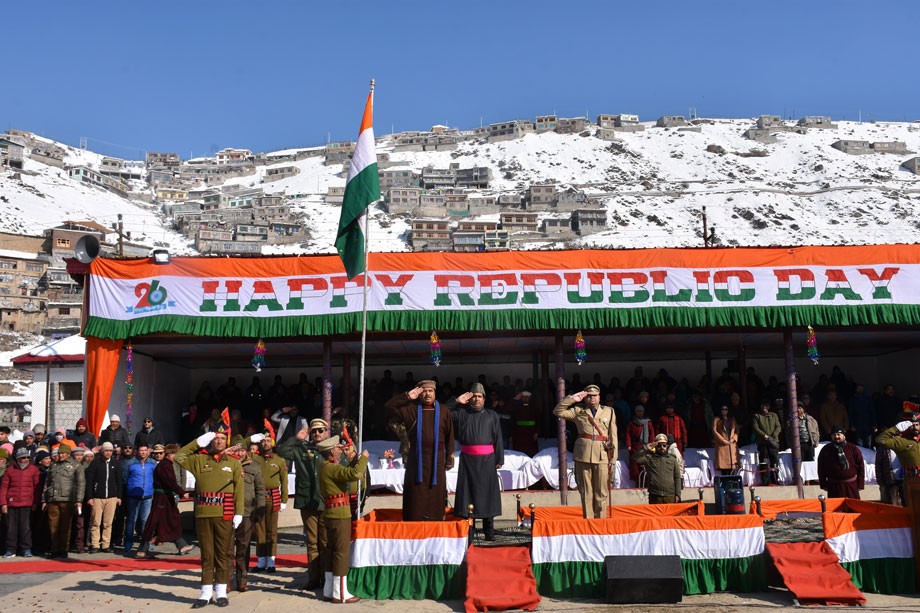 Khan recalled the contributions of the makers of the Constitution and supreme sacrifices of the national heroes who laid down their lives for the country. He also hailed the services of the Army, paramilitary forces and police in guarding the frontiers of the country in harsh weather conditions and for maintaining peace, order and internal security in the country.

While highlighting the achievements, developmental activities underway and future plans of the present Council in Kargil District, CEC said that developmental works are going on in full swing in sectors like Public Works, Agriculture, Tourism and Rural Development while as concrete measures are being taken to augment other sectors.

"Under PWD Sector ₹ 800 crore rupees have been sanctioned by the Central Government for up-gradation of the Kargil Zanskar National Highway 301. Technical and financial sanction has already been accorded under Package 4 and 5 wherein work on the upgradation of 2 road stretches of around 30 kilometers length will be started soon at an approximate cost of ₹ 250 crores", he added.

With regard to the present scenario of Power Sector, CEC said that visible improvement has come up in the position of power supply as compared to previous years and through the electricity supply from the Power Grid, the duration of power supply for urban areas has been enhanced from 12 to 20 hours and in case of rural areas from 8 to 18 hours, due to which the public has got a lot of relief.

He said that in the areas with power supply from DG sets, the duration of power supply has been enhanced from 5 to 8 hours in Kargil and 4 to 7 hours in Zanskar.

Khan said that keeping in view the importance of agriculture as the key sector of income for a major portion of the district’s population, the Council has flagged the development of agriculture, horticulture and allied sectors among its topmost priorities. He said that 72 new and improved varieties of apricot and mechanism of honey production from alfa -alfa flowers have been introduced in the district through SKUAST in the recent past and 250 quintals of honey have been produced from alfa -alfa flowers in just 20 days time which is a record in itself.

Feroz Ahmed Khan said that these innovative technologies would soon be introduced among the farmers during the coming agricultural season, which will go a long way in enhancing their income and improving their livelihood.

Regarding the measures for tourism promotion, the CEC said that with the objective to augment the influx of domestic and international tourists in the district, a number of tourism festivals including the Kargil Ladakh Tourism Festival has been organized at the district headquarters as well as other areas like Zanskar, Shargole and Darchiks Garkone. He said that other steps on this front also include the first-ever fame tour of the eminent travel agents, travel writers travel journalists to the district last year as well as the publicity campaigns at SATTE 2019 and OTM Mumbai.

He said that to provide better residential facilities to passengers and students studying outside the district is also amongst our top priorities and the Hill Council is taking all measures to pursue this goal. He said that renovation works at Kargil House Srinagar and Jammu and Boys Hostel Channi Jammu are going on in full swing which is expected to be completed in near future.

Talking about the steps being taken to revamp the educational sector he said, "To ensure the provision of quality education, apart from skill enhancement training to teachers, Government schools are being run on  model school basis". He also congratulated those teachers whose dedicated efforts have brought a renewed enthusiasm towards the overhaul of the educational system in Government-run schools.

CEC also expressed his thankfulness to the UT Ladakh Administration particularly Radha Krishna Mathur, Lieutenant Governor for his keenness and concern towards the equitable development of both Leh and Kargil districts. He also expressed optimism that under his able leadership, Ladakh UT will touch new heights of progress and development. He also sought the intervention of LG Ladakh in ensuring the early start of work on the construction of Zojila Tunnel and resolution of issues related to the expansion of Kargil Airport by taking them up with concerned authorities of the Central Government.

Khan also expressed gratitude to his team of Executive Councilors and Councilors, Deputy Commissioner and CEO, LAHDC, Kargil, SSP Kargil, Directors and the team of officers in the district for continuous support and dedicated services in the implementation of the developmental projects in the district.

The CEC also hailed the efforts of the media fraternity in the district for their role in highlighting the developmental activities as well as the issues and grievances of the public at the appropriate platforms.

Meanwhile, colorful cultural programmes were presented by the artists of Cultural Academy and students of various Government and private educational institutions.

Later, the CEC and other dignitaries distributed mementoes and certificates among the employees of various departments, meritorious students, members of NGOs, volunteers and individuals for their extraordinary performances and contributions for public welfare. Prizes were also distributed among the participants in the March Past and cultural programmes.