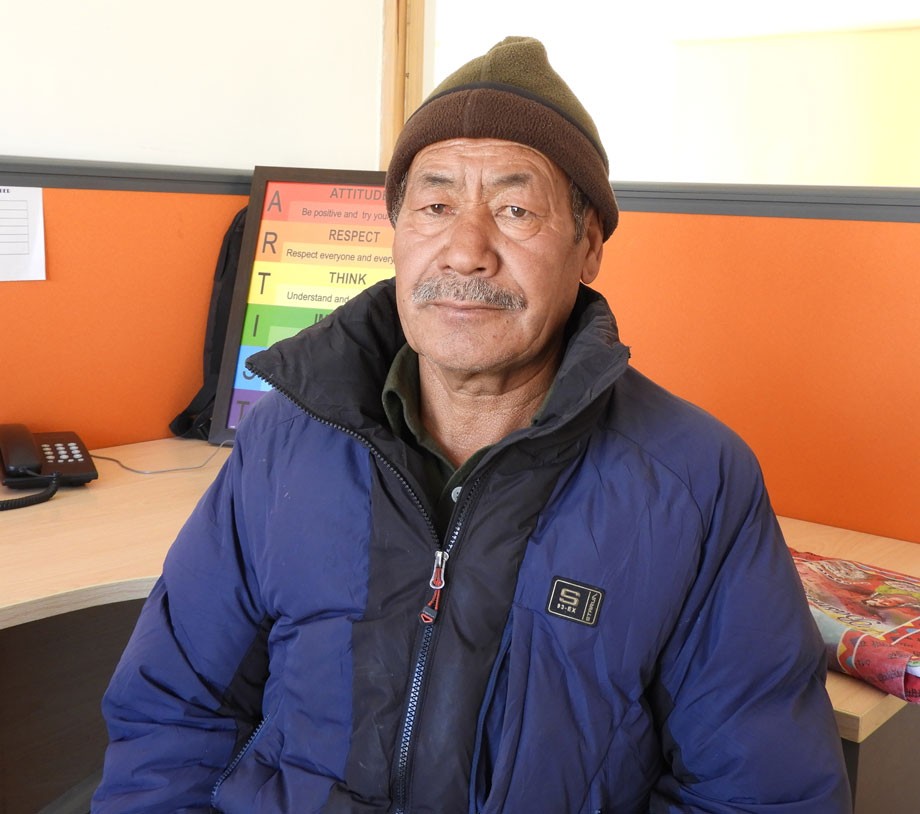 Q. How playing polo inspired you?

Horse polo was a very famous game during my childhood days. I have seen the love for the game and enthusiasm of the old people at that time to ride on the horses and play.  All this naturally inclined me towards the game. I started playing at the age of 17 years (now 63 years) and almost played polo for the last 40 years.

I played it as fun in my initial age when my father bought a horse for me.  I started working in the Animal & Sheep Husbandry department and played for the team of the department. I was retired in 2012, and today we have formed our own team known Indus Polo club Chuchot.

Q. Polo is known as a sport for royals. Can you tell us about the history of sport in Ladakh?

The royal game, ‘Polo’ was there from centuries ago, and has been a popular sport in Gilgit, Hunza, Skardo, Ladakh, and Manipur.  According to the legend, the game was introduced in Ladakh during King Jamyang Namgyal reign from Baltistan who married Gyal Khatun, the Balti princess. Since then, the sport has become part of our culture and a main source of amusement for the people.

Q. What is the status of the polo in Ladakh?

Polo the traditional sport of Ladakh was loved by the masses and one among the main source of entertainment. It was so addicted among the players that during the leisure hours they will be found playing the game. Apart from nobility, the game was very popular in almost all the villages of Ladakh, particularly in Chuchot.  The pologround called as ‘Shagaran’ of Chuchot is still there and the sport is played occasionally. That was a time when playing the game doesn’t need planning and a special day.

But time has changed now, there are limited local teams. Only the teams of army, department and local team participate in the tournament. Also, horses are not raised like before and people find it difficult to raise the horses as the game is not being pursued professionally. The game is mainly highlighted during the ‘Ladakh Festival’ and ‘Ladakh Polo Festival’ which is also a great step to keep it alive.

Q. Did you participate in a tournament outside Ladakh? What are the challenges faced?

Apart from the local tournament we also participated in Jaipur and Srinagar. In Jaipur, there were some issues regarding the horse’s vaccination because of which we were sidelined.  The maintenance, proper care of the horses with vaccines was unknown at that time. We also played an exhibition match with the Manipur team and won as well. The players of outside are well equipped with modern facilities and play with stricter rules as compared to the local traditional game.

Maximum of the players at our time was not well educated so was unaware of many things.

Q. How can we promote and develop the game in Ladakh?

To promote and develop polo in Ladakh, we definitely need more professionalism and seriousness. Awareness about the importance of the polo sport is must along with the support from the Hill Council for extensive development. A provision to raise the horses and training is needed to make the youths more interested in pursuing the game. It does cost a lot to buy a horse and polo ponies are quite expensive.

Q. What is the difference between polo that is played in Ladakh and other parts of the country?

The game is incomplete without the beats and sound of Daman and Surna in Ladakh. When we went outside the region and interacted with the players we found that the game is played with strict rules and professionalism. In Ladakh, the game is played very furiously on the barren land.  Six players play in each team, whereas at international level 4 players play on each side.

Q.  How difficult or easy is it for youths to pursue the sport professionally?

If one is interested and love the game, pursuing it is not at all difficult because the challenges will be overcome easily.  But yes, the game does have many risks to the player and horses. The game is all about strategy, horsemanship, skill, and nerve. When you are riding on the horse with a stick to hit the ball and score goal you need to have good control. Though it’s difficult, but it’s not impossible if one has a passion to play and score.
If there are more polo clubs and training facility the game can be encouraged a lot among the youths.

“Polo is a traditional game and to preserve, promote and develop it is our responsibilities. The game of the masses needs support at all levels to make it of standard so that interested youths can pursue it professionally.”