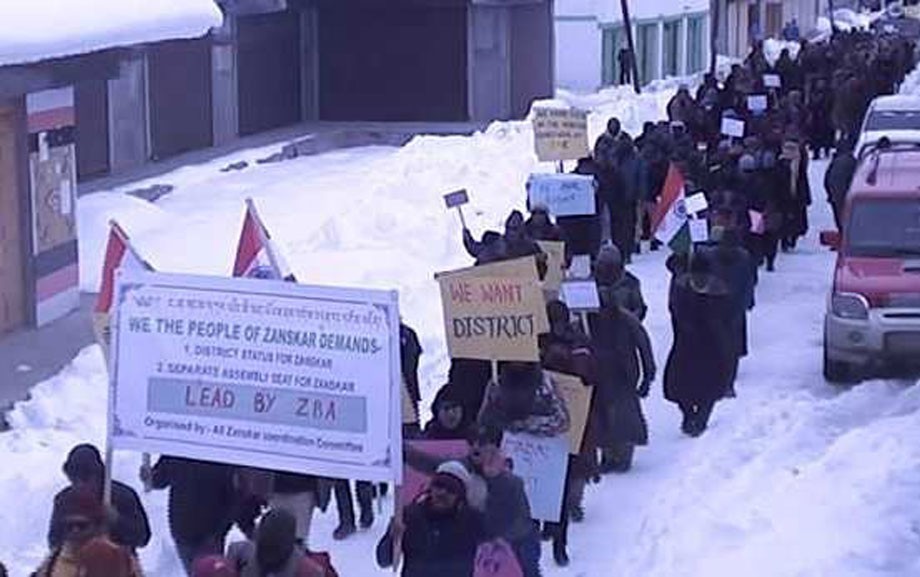 Even in today's time people of Zanskar are being deprived of basic amenities such as proper health systems, connectivity, electricity, education, and telecommunication services. People face many difficulties and challenges specially women during their pregnancy and delivery because of the unavailability of adequate doctors and health facilities. Even for a simple complication, we had to rush the pregnant women to the district hospital on those bumpy and irregular roads. There is a case of women delivering a baby on the way to district hospital; some suffer from infection, lose a child and even mother during delivery. This year because of the heavy snowfall, telecommunication services got hampered for a long time causing a lot of hardships to the people of the native area and student studying outside. The growing issues compelled people to come on the roads raising their issues.

Leh and Kargil were given district status way back in 1979 but Zanskar region despite having an area of 7,770 sq. with significant geographical location and people with its own unique culture and tradition different from Kargil, the region was not declared a separate district. People of Zanskar now and then have been demanding separate district status because of the hardships and struggles people face due to lack of proper basic facilities.

We are thankful to the UT administration for restoring the telecommunication lines and very soon under the direction of Commissioner Secretary, one gynaecologist from the district hospital will be deployed to the Zanskar every month for few days to carry out health camps. These initiatives will solve the issues for a time being but Zanskar needs a solution for the long term.

All these years at various levels, leaders, and people of Zanskar have been demanding district status. In 2006, when Ghulam Nabi Azad was the Chief Minister of the erstwhile J&K state, eight new districts were created but the Zanskar sub-division was neglected. The demand and aspiration of the people of Zanskar were undermined despite assurances from the successive governments and leaders. Also, in the year 2019 people voted BJP candidate in the parliamentary election because of the assurances made by the party. With the changing political scenario, people of Zanskar got a ray of hope in achieving their long-pending demand.

Second most important demand of the people of the Zanskar is the early completion of Nimoo Padum Darcha road which will not only benefit the people of Zanskar but entire Ladakh region to stay connected with the rest of the country.

I have personally met Prime Minister, Home Minister and other concerned ministers and officials in Delhi and expressed the issues and demands of the region. On February 2, 2020, BJP party announced new district units in Nubra and Zanskar which is also a very positive sign. We hope that soon the demand for the region will be fulfilled.

Lobzang Tashi, General Secretary, LBA Youth Wing Zanskar: Zanskar Sub-Division has been demanding separate district status for a long time now. Most of the political parties including the current MP Ladakh have contested election with the manifesto of separate District for the Zanskar Sub-Division and have been able to register their victory on the plank of district status. Since the partition of Ladakh into two districts of Leh and Kargil, Zanskar has been complaining of step-motherly treatment from the Kargil district. The prolonged demand for separate district status for Zanskar stems from economic backwardness, administrative remoteness of the region from its district headquarters, geographical condition and sense of isolation from the current district administration.

Union territory, which was thought to be key for the development of the area and with this dream people of Zanskar have always supported the demand for UT Ladakh. Sixth months have passed since that popular celebration at Leh market and elsewhere, which were followed by speeches thanking the Union government for granting UT status for Ladakh. But for the people from the margins, it is still the same as they are still living a miserable life.

Zanskar Sub – Division has been facing intermittent communication blackout for more than months, which was restored just a few days back that too under public pressure. BSNL, which is the lone service provider in the region, has failed to provide a stable telecommunication network. Most of the villages do not even have cell phone towers and people are finding it extremely difficult to connect with the outside world and most importantly with their beloved ones studying outside Ladakh. After the snowfall, the only surface link Padum – Kargil national highway connecting Zanskar Sub-Division to the rest of the country gets collapsed. This road link is only surface connectivity for the survival of Zanskar and being predominantly the consumer market, the shutting of highway triggers a huge economic crisis.

Life comes nearly to a standstill in this part of the region due to geographical isolation from the rest of India. Due to its administrative remoteness from the district headquarter; the villages in Zanskar have received fewer roads, secondary schools, and health facilities. Poor living standards of the people of Zanskar are testimony to this fact. Given its strategic location, this region should have been developed as the model tourist destination. Today Zanskar is one of the most underdeveloped and least known regions of India. People also complain that the Government has failed to complete many key projects such as Nimmo Padum Darcha road project which is notoriously infamous for its missing deadlines.

People of Zanskar have been for a long time, demanding effective local administrative arrangements which can help to promote and accelerate the pace of development. Since the bodies below the district administration like the SDM and the BDO do not enjoy a lot of powers, people take most of their grievances to DC. And under the present administrative setup, people of Zanskar have to travel for days to approach the concerned district officer for the redressal of their grievances. By granting separate district status for Zanskar, developmental activities will get a boost and meet the aspirations of the people. This will bring administration closer to the people, which would also lead to better administration of the region. Creating a separate district will also generate employment, more the 59 different departments will be created in the new district, as the DC office alone has more than 200 people.

Districts are the third tier of India’s governance structure, after the Centre and the Union Territory. As per the rules of the Union Government, 60% of the CSR funds of central government-owned companies are set aside for health, education, and nutrition of the government designated backward district. Thus, creating a new district will lead to development and prosperity in the region.