Ladakh Festival to commence from September 22 in Leh 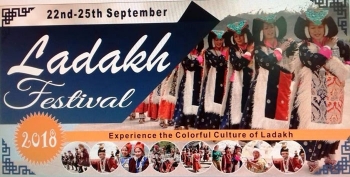 LEH :
Like every year, with an objective of lengthening the tourist season in Leh and to promote the cultural heritage of Ladakh, the four days Ladakh Festival is going to commence from September 22 to 25 in Leh.

Villagers from Nubra, Changthang, central Ladakh and Shaam regions will come in their traditional attire to participate in the 4 days Ladakh festival. As per past practice, this year also Ladakh Festival will begin with a colourful procession of cultural troupes from all part of the district and school children performing on traditional musical orchestra starting from Karzoo through Leh market that finally ends at Polo-ground, Leh.

The schedule of the four day Ladakh Festival are:
During Ladakh Festival all the government employees have been asked to come in traditional dress and general public is also requested to wear traditional attire during the festival. It is a day for every Ladakhi and specially for tourists to experience and enjoy the cultural richness of Ladakhi tradition at one place during the festival.
Hotel Search
Tour Operators
Unfold Ladakh
Marvel Destinations
Wanderlust Lists
Feature Attraction
Peculiarities
fair & festivals
institutions
Guide Books
Contact Us
Subscribe