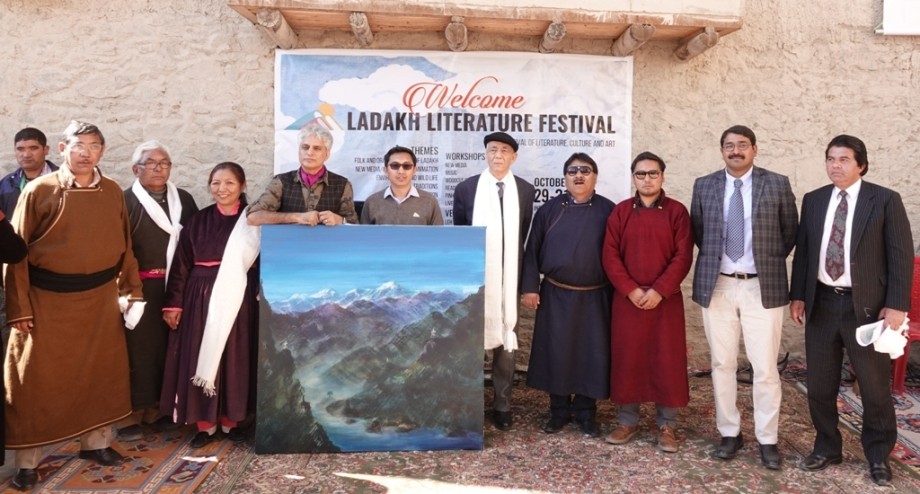 Leh :
To revive, strengthen and promote the rich heritage of Ladakhi culture, history, art and languages, the first-ever ‘Ladakh Literature Festival’ held from October 29 to 31 in Leh.

Around 500 participants joined the festival on the opening day. Nearly 100 speakers and panelists representing from all over Ladakh including Bhoti, Purgi, Sheena, Balti and Urdu literary background shared the richness of the language and cultural diversity. Over 50 prominent speakers from all over the country including intellectuals, writers, experts from different fields spoke on various themes including fiction, environment, media, journalism, new media, films, bureaucracy, graphic arts, history, archeology, etc.

Students from different schools of Ladakh participated in different competitions and workshops on poetry, calligraphy, recitation and storytelling.

Gyal P Wangyal, CEC,Hill Council, Leh asserted that the time has come for Leh and Kargil to stand united in UT Ladakh. He said that language and literature would be an important tool in strengthening the regions identity and integrity.

Talking about the Literature festival, he said that such initiative will help in highlighting the unique cultural heritage of Ladakh and stressed on the need to continue it as an annual event at a larger scale. He said that the literature festival will be of great benefit to the younger generation.

Saugat Biswas, Divisional Commissioner Ladakh citing Ladakh Literature Festival as the highest Literature Festival in the world said that the idea behind holding this festival is to open culture, tradition, history and society to the literary world and to foster the spirit of exploration of various cultures and its appreciation within Ladakh.

He apprised that the endeavors were made to bring out the rich culture, writings, expression of art and literature through poetry from Ladakh to the world and to bring the world to this remotely located region scattered in an area of 60,000 sq. km.

C Phuntsog, Vice-Chancellor, University of Ladakh said that such festival will help take civilization, culture and society forward and expressed his best wishes to continue it in future. He said that Literature has two sides and the human race being the most self-conscious have the tendency to rise or fall to any level.

He stressed on making the best use of literature to express the creativity and positivity for common good.

A session on folk, history, art and heritage conservation followed by intense discussion and interactions was held. A book titled “Leh Khar Gis Khang Zigs” authored by Gen Thupstan Paldan was also released on the occasion. In conversation with women Everesters from Ladakh, Paper reading on different languages, poem recitation, talk by prominent, scholars from Leh and Kargil, Pinhole camera workshop’, multilingual Mehfil-e-Mushaira presented in Bhoti, Balti, Sheena, Purgi and Dardi by poets of Leh and Kargil and many other programs were held during the three days festival.